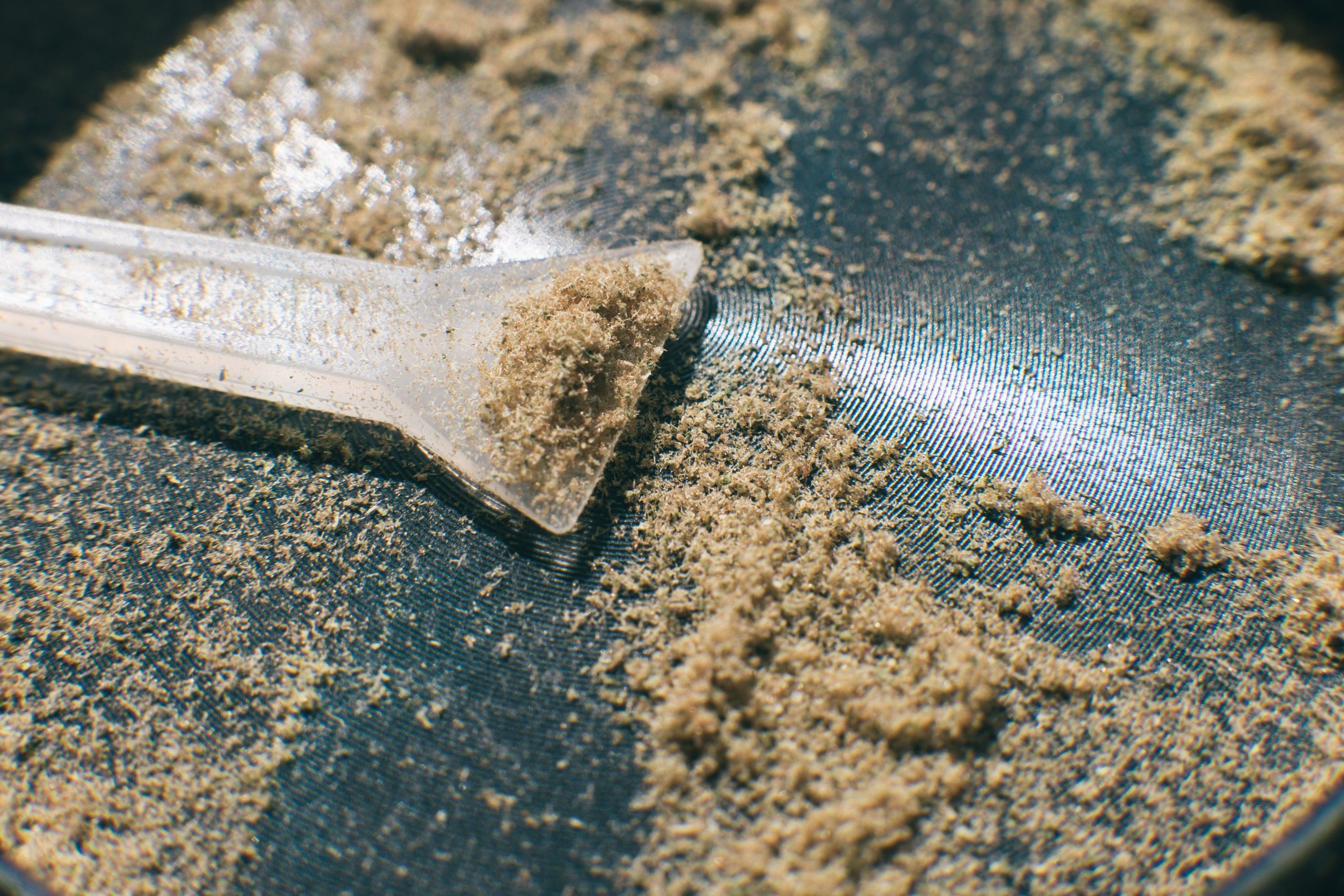 Yup, this is going to be one of those super intellectual articles. Right on par with whether you can smoke a mushroom, which we got to the bottom of not that long ago. It’s a valid question, of course, and I think it’s necessary for readers to know. So today we attack the very-important question of, can you snort kief?

Ah, the age old question of can you snort kief… here’s what you need to know. We’re a cannabis and psychedelics news publication which reports on big stories in these exciting and growing fields. We also offer the Cannadelics Weekly Newsletter for readers to keep updated, as well as access a bunch of awesome deals on all kinds of swag from vapes and other smoking paraphernalia, to edibles and cannabinoid compounds like the uber-popular Delta 8 & HHC. Head over to our ‘best of’ lists for more info, and pick yourself up the products you feel most comfortable using.

If you’re smoking some low grade, twiggy, full of seeds ditch weed, you’re probably not concerning yourself with kief. But for those smoking the good stuff, the kief is the cherry on top of the cake. Some people collect it by using grinders with an entrapment on the bottom to catch the powder, or stash containers with the same collection repository. Some people like to sprinkle the kief on cannabis or tobacco, or to save it up and compress it into hash. If necessary, kief is usable in place of weed, if you run out of that first.

So, what is the stuff? Kief is the powdered trichomes that come off of the flowers of the plant, often called pollen, or resin glands. The trichomes are the chemical building structures that house the cannabinoids like THC, and terpenes like linalool; so if you have a bunch of high-quality cannabis kief, you’ve essentially got a bunch of high quality cannabinoids and terpenes too.

Kief is the starting point of hash. Hash is made of the compressed resin glands of the plant, AKA, trichomes, or kief. Just like kief is a concentrate because its comprised solely of trichomes, hash is a concentrated version of these trichomes, as well. Hash is made pretty simply by squeezing the kief together until it becomes a solid. This doesn’t require more than rolling kief in the hand, or smashing it in a plastic bag. For some people, the entire point of saving up the kief, is to turn it into hash.

If you’re smoking the low-grade, twiggy, full of seeds ditch weed, there won’t be kief, or not as much. The plant will still have cannabinoids, but far fewer, which is why such weed isn’t known for producing a good high. The more kief there is, the stickier the plant feels, the brighter the color, the more pungent the smell and taste, and the greater the effects. Have you ever had weed so strong that you could smell it even after wrapping it in two plastic bags and sticking it in a backpack? That’s the kief!

Kief is powdery by nature, which is why there’s confusion over how its possibly used. After all, we snort other powdery substances, like cocaine and ketamine, right? Is it that far off to ask, can you snort that kief, as well?

Realistically, kief functions similarly to cannabis flowers. It can be smoked, eaten in edibles, vaped, used in a tincture, or applied to skin creams and salves. Generally, we don’t consider snorting weed, but kief is such a concentrated part, and so powdery by nature, that the question does come up. Unfortunately, the question ‘can you snort kief’, might not come with the answer you desire.

Can you snort kief?

We’re a world of people who like to self-experiment. Maybe this is a sign of widespread boredom, or simply a constant desire to try to push the boundaries of what makes us feel good. The reason I’m writing this article today, is because the question ‘can you snort kief’ is a relatively prevalent one, and an easy-enough experiment, that many have tried. Anyone who has, likely came to the same result.

There are two things to remember about cannabinoids and your nose. The first is that the mucous membranes of your nose won’t take up cannabinoids in their natural form, since you are water-based, and they are oil-soluble. When a person uses a THC nasal spray, they’re using a form of cannabis which has been emulsified to make uptake through the nasal passage possible. This process turns something oil-soluble, into something water-soluble. This doesn’t happen naturally, though. If it did, it might be commonplace to see people with the plant shoved up a nostril, and let’s be honest, no one does that.

The other thing to remember? Even if you could shove it up there, it would have to be decarboxylated first in order to access any psychotropic effects. It’s still weed after all, and if the THCA isn’t transformed into THC, there’s no high to access in the first place. For anyone thinking they want to go decarb their kief to try snorting it that way…just remember the first point, that it won’t matter since marijuana isn’t water-soluble. Sorry, guys!

Plus, if you want a couple more reasons not to attempt this experiment, here are a couple more things to consider. Kief is coming off a plant, it’s going to be mixed with dirt, and other unwanted particles that might not be desired by the inside of your nose. The reason people use nostrils for medication uptake is because there are a lot of blood vessels, but this means its also easy to get bad microbes up there.

Snorting something dirty and unrefined is a great way of getting an infection. The other aspect of this? It probably won’t feel good. That’s a sensitive area that doesn’t want such particles coming into it. Snorting kief will result in no high, but discomfort in your nostril. Something like cocaine numbs the inside of your nose to make it a painless experience, but kief can’t do this; if you choose to experiment in this way, expect to feel the burn.

If you REALLY want to snort weed, there might be a way…

Alright, so if you cue up that kief line, and snort your way through it, you’re probably going to irritate your sinuses, and not much more. What if you’re not snorting kief, though, but an isolate instead? There are some interesting stories about people getting pretty messed up from blowing through lines of isolate.

Well, according to Marijuana Mommy Founder, and RN, Jessie Gill, nostrils don’t provide enough bioavailability for isolates since cannabinoids are fat-soluble, not water-soluble. Since mucous membranes are comprised mostly of water, this doesn’t get around the same uptake issue previously mentioned.

Despite this, Gill notes that “it’s easy to over-consume.” And specifically about CBD, “Consuming high doses of CBD via any method can lead to overstimulation, which some people may interpret as a ‘buzz.’” While there still isn’t much backing up this method of delivery, there are a few personal stories out there. In all cases, however, what other drugs the user might have taken, wasn’t accounted for. It also can’t be ruled out that those who claim a high from this experience, were really just experiencing the placebo effect.

Searches in online forums turn up mixed results, but way more on the side of no effect. Once again, when looking through reddit or Quora, it’s impossible to know the specific situations, confounding factors (like other drugs), whether there was a placebo effect, or if the person just wants to spin stories. The general consensus meets the science, in that though a person can snort kief, they’re just not going to get high.

So, there you have it. In answer to the question, can you smoke kief, the answer is a resounding ‘well, it won’t kill you, but it won’t do anything for you either.’ If you want to make good use of that kief, sprinkle it on a bowl, smash it into hash, or use it for your edibles. But if your goal is to snort it, all you’re doing is wasting some super fine bud concentrate.

Welcome all! We appreciate you joining us at Cannadelics.com, the place to go for comprehensive news on the cannabis and psychedelics spaces, all independent! Stop by daily to stay informed on changes in these industries, and sign up for the Cannadelics Weekly Newsletter, so you’re never late on getting the story.

If Cannabis is Legal, Why the Police Raids? – Cannabis | Weed | Marijuana

Whoa! Here’s How Many Pennsylvania Voters Want To Legalize Marijuana

Flower Is Still King in the Cannabis World, But For How Long?