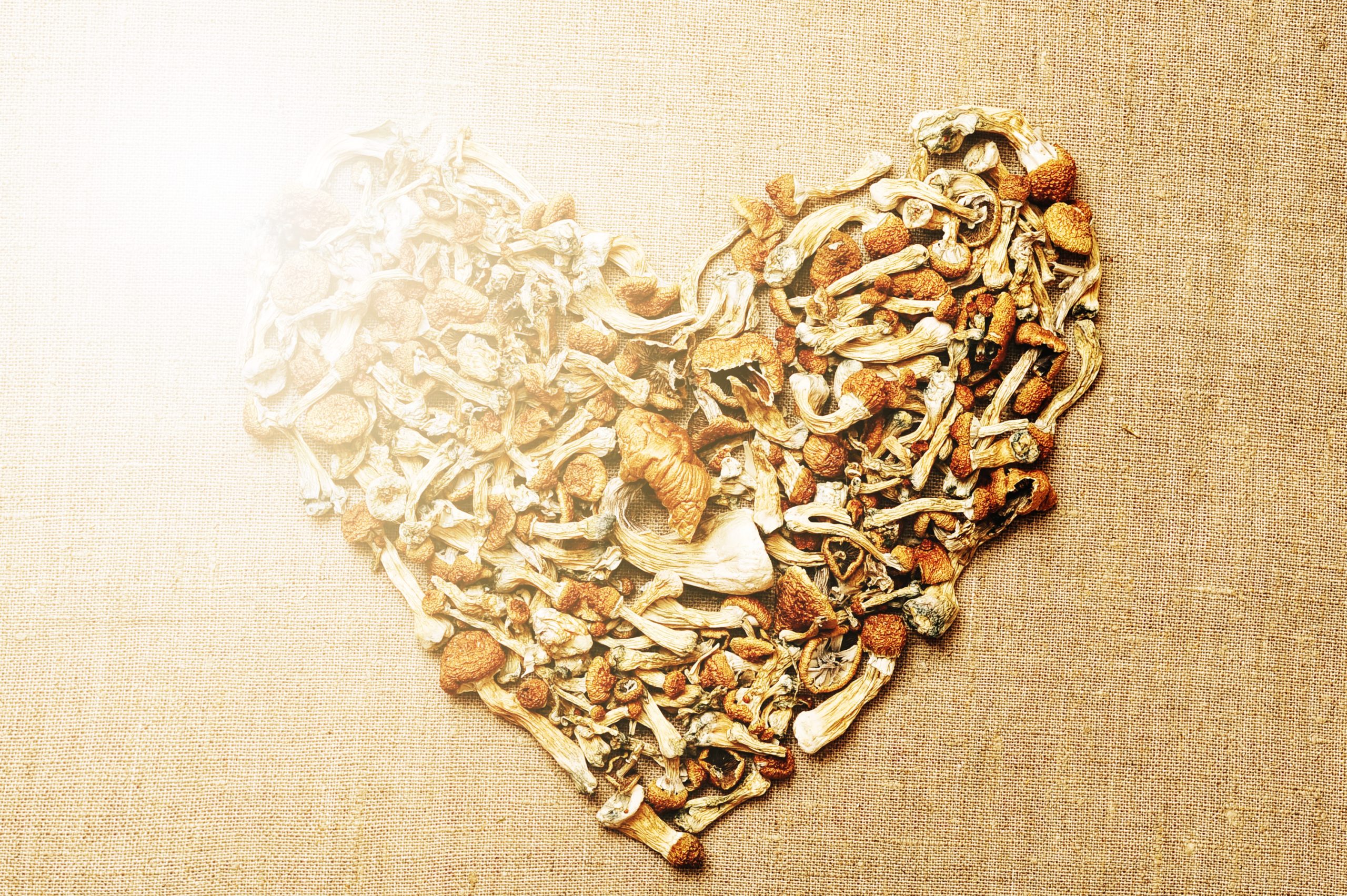 One of the chief objectives when couples are getting married, is to throw a fun wedding with the right type of atmosphere. And while alcohol can be great to help loosen people up and get the party going, it certainly has its drawbacks as the night goes on and people get more and more intoxicated (arguments, physical altercations, sickness, etc.). This is why many modern couples are opting to nix the alcohol in favor of more mellow (yet still very fun) substances to serve on their big day.

Currently trending: cannabis and magic mushrooms at weddings. Both are wonderful alternatives to your standard alcohol weddings, and let’s be honest, a lot of people are using their own drugs when they attend an event anyway – be it smoking a joint in the parking lot, popping a few gummies, or even sneaking a couple bumps of coke in the bathroom – people go to weddings to have a good time. I know I’ll certainly be stoned at any function I go to, so I don’t expect any less from other wedding-goers, and it makes sense to have a couple of these options on offer.

To stay current on everything important happening in the industry, subscribe to The Cannadelics Weekly Newsletter. Also, it’ll get you premium access to deals on cannabis flowers, vapes, edibles, and much more! We’ve also got standout offers on cannabinoids, like HHC-O, Delta 8, Delta 9 THC, Delta-10 THC, THCO, THCV, THCP & HHC, which won’t kill your bank account. Head over to our “Best-of” lists to get these deals, and remember to enjoy responsibly!

For a perfect example of a more alternative and “natural” wedding, look no further than Joshua Tree, California, where a Brooklyn-based couple skipped the traditional dress codes and champagne and opted for a casual wedding in the wide-open desert, with magic mushrooms. “We hate conventional weddings, and we basically wanted to do everything antithetical to what that entails,” mentioned the bride, who asked not to be identified. “So we thought it would be hilarious if rather than choosing meat, fish, or vegetarian on the RSVP, we have people choose their drug.”

So, that’s exactly what they did – offered their 120 guests a choice between cannabis, mushrooms, or palo santo (which is not a drug, but rather a type of wood that’s burned during spiritual ceremonies in South America). “It had an element of surprise and delight for our guests, and combined my passions of complicated Excel spreadsheets, crafting, and dabbling in drugs,” the bride mentioned.

All-in-all, it was a pretty even three-way split between the options (which surprises me as I assumed many people would skip over the palo santo). Once at the wedding, the guests picked up their preferred drugs that were provided in small Etsy welcome totes. The weed was supplied by a legal dispensary, and the mushrooms (which came in mircodose capsule form) were made by “a friend in Brooklyn who grows mushrooms and puts them in these cute little capsules with adorable branding,” according to the groom.

The couple made sure to test out the doses personally to make sure nothing too potent was handed out at the event. “I wrote something like, ‘Wanna feel almost nothing? Take one. Wanna feel a little buzz? Take two,’” the bride says. “We were so simpatico with everyone that was actually there that they knew us, they knew our intention, and even if they weren’t into drugs, they could have fun and laugh about it,” she added.

I imagine there really was a lot of laughing going on. If you’ve used mushrooms, you’re likely familiar with the giggles that accompany the high. Almost every time I’ve shroomed, I couldn’t but laugh at, well, pretty much everything. It’s not non-stop hysterical laughter for the duration of the trip, but at random points, things feel extra funny and lighthearted, even whimsical… and who wouldn’t want that kind of vibe at their wedding?

Right now, and for the last few years, we’ve seen some trends that are really taking hold in the wedding circuit. Among them, is a growing interest in nontraditional, outdoor, and sustainable events… and the wedding above encompassed all three. At minimum, offering drugs instead of alcohol certainly falls into the nontraditional category.

There’s been a surge in weed weddings since Colorado and Washington became the first states to legalize cannabis recreationally back in 2012. Around 40% percent of adult consumers claim to use cannabis products at every event or special occasion they go to, and companies are taking heed and taping into this burgeoning market. As a matter of fact, there so many weed-centric wedding companies in the industry now that they have their own convention, The Cannabis Wedding Expo, which is ongoing since 2016 and held in many cities across the country.

Lately, with psychedelics regulations loosening up in numerous pockets of the world (including a handful of US localities), we’re seeing an uptick in those as well. Not to say that shroom weddings are super common, because they’re not, but it’s an emerging fad that’s sure to gain some traction in the coming years.

So, what can you expect from a shroom wedding? You’re unlikely to get actual mushrooms as a party favor, as fun as that would be. Instead, what is most frequently on offer will be psilocybin-infused capsules, chocolates, and gummies. Not only does this make the mushrooms more palatable (even many regular shroomers are put off by the taste and texture of eating them dry) but it’s much more discreet and can be more easily worked into various wedding-day themes.

This ring true for a Los Angeles-based manufacturer of such products, who says he is selling roughly 20,000 chocolate bars per month, which is four times as much as he was selling only 3 years ago. It’s hard to say exactly how many of his chocolates are going to weddings, however, many of his clients have specified that the bars are for their special day.

Compared to other psychedelics like LSD for example, one of the great things about shrooms is that you really do have a lot of control over the dosing. I’ve only tried real mushrooms (both dry and raw), I haven’t had the opportunity to check out all these psilocybin-based products that are hitting the market as of late. But even in their natural fungi form, you can easily eat just a small piece of a stem or cap to get the equivalent of a microdose high, or you could put down a full quarter in one sitting and discover the secrets of the universe – and everything in between.

If you’re taking an already-dosed capsule or edible, it’s even easier to figure out exactly how much you need. Start off low and slow… so take your first dose then wait about 1 hour, and if you want to feel more, take another small dose, and so on. It’s the delicate balance of the microdose, and it seems like everyone is asking about microdosing psychedelics.

Building up the high in microdoses, as well as making sure partiers are limited in how much they can take, is crucial to making sure everyone has a nice chill evening and nobody loses their cool. Imagine if someone was trying shrooms for the first time and not knowing how much they should take, just kept popping capsules one after the other or ate a full chocolate bar in one sitting… no one has any idea how they might react (including the person taking it). They could be happy at one moment and paranoid tripping, and the overstimulation of being around a wedding full of people they don’t know could make for a very unpleasant experience, for literally everyone in attendance. That’s the last thing anyone wants happening during their nuptials.

A Word of Warning

Although generally speaking, microdosing does work, it’s worth mentioning that just because the dose is low, that doesn’t always equate to a better or more stable experience. For me personally, microdosing is surprisingly more stressful for me than a full-blown mushroom high. I know it sounds strange, but in my opinion, really elucidates the idea of variability between people and their reactions to different external stimuli.

I’ve tested this multiple different times now and the results have been consistent, so this is just how my body and mind react to mushrooms I suppose; but when I take low doses (a small piece of a cap or stem, for example), I get a really uncomfortable, mind-racing, anxious type of high. However, when I cross the threshold and take enough shrooms to actually produce some visual effects, I feel infinitely better. That’s when I truly experience the mushroom high that everyone talks about, the feelings of connectedness and euphoria that would make taking mushrooms at pretty much any event seem like a wonderful idea.

While it’s still more of a fringe idea, we can definitely expect to see un uptick in alternative weddings in the coming years, including those that serve weed and magic mushrooms to the guests. This is especially true as we continue to uncover how safe, therapeutic, and fun these substances really are.

Hello readers! We appreciate you joining us at Cannadelics.com, a top choice news platform for independent coverage of the growing cannabis and psychedelics landscapes of today. Come by the site whenever possible for updates on current and world-changing events, and head over to the Cannadelics Weekly Newsletter, so you’re always up on what’s going down.

How recreational access affects medical cannabis according to BDSA

Biden To Meet With Brittney Griner’s Wife And Paul Whelan’s Sister: Is A Prisoner Swap In The Works?

OGeez! has a gummy for every pocket