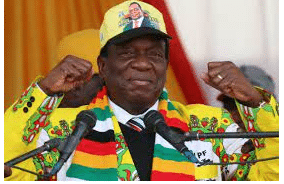 According to The Herald, President Mnangagwa commissioned the farm yesterday to produce cannabis (mbanje or dagga) for medical and scientific purposes.

During his speech, Mr Mnangagwa said the rapid development of the processing plant, which adds significant value to the crop, was a testimony of the success of the Government’s engagement policy and the confidence Swiss companies and investors had in Zimbabwe and its economy.

“This milestone is a testimony of the successes of my Government’s Engagement and Re-engagement Policy. It further demonstrates the confidence that Swiss companies have in our economy through their continued investment in Zimbabwe. “I extend my profound congratulations to the Swiss Biocieuticals Limited for this timely investment in the medicinal cannabis farm, processing plant and value chain, worth US$27 million,” he added.

While praising the investors for the speedy execution of its operations from the time it got its operating licence, the President also urged other investors with permits to quickly operationalise their permits and licences for the benefit of the economy in general and people in particular.

He added that the investors should follow the company’s lead and open their business to support the mantra that ‘Zimbabwe is Open for Business and be ready to generate foreign currency generation for the country.

“I challenge other players within the medicinal cannabis sub-sector to speedily set up their enterprises, focusing on value addition and beneficiation. It is disappointing that since 2018, only 15 out of the 57 entities issued with cannabis operating licences have been operational. 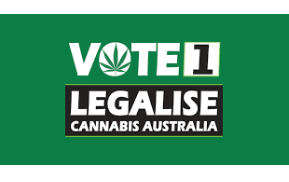 It’s too early to tell, but things are, according to the Guardian, looking good for progressives in the Senate.

David Shoebridge the leader of the Greens said during the campaign that regulated adult use cannabis would be on the table if the Greens had any semblance of power in either of the houses.

As of Sunday AM the Guardian knows this

It looks as though Labor, the Greens and the progressive independent David Pocock may together form an absolute majority in the Senate.

Labor and the Greens will disagree on plenty of issues, but both will have an incentive to ensure success in the next term. And with up to four Greens elected to the House of Representatives, legislation with Greens support will have a handy buffer in the lower house.

The Greens look set to win a senator in every state, which would give them a total of 12. They appear to have gained a seat in Queensland, ousting LNP senator Amanda Stoker, and in South Australia from the former Centre Alliance independent bloc. Former senator Nick Xenophon’s comeback bid was a failure, sitting on 2.7% of the primary vote when counting was paused on Saturday night. The Greens are also set to take Labor’s third seat in New South Wales, the vulnerable seat that Kristina Keneally vacated to make her ill-fated run for Fowler.

A large swing to Labor in Western Australia has put them on course to win three seats, in addition to the incumbent Greens senator. That third Labor seat also comes at the expense of the Liberals.

This will, we suggest, give them a modicum of wiggle room to push cannabis onto the Labor govt agenda.

Musing aloud I’d guess that Labor will, like Biden in the US, kick that can down the road for as long as they can indicating that they have far more important pieces of legislation that they need to get passed in the interim.

Essentially, there is a possibility for the Greens to enact change on many aspects of cannabis decriminalization and regulation but they will get a lot of push back from a cautious labor government.

In terms of the Cannabis Party we aren’t seeing any reporting yet that preferences will get one of the candidates across the line for a Senate seat but in terms of raw numbers but they aren’t doing badly considering they are a single issue party.

Australia has quite a complicated preferences system that comes into play for Senate seats and as you can see below the Cannabis party have, as yet ,not applied their preferences.

Does this mean that as a block they may have enough votes across the country to give them some horsetrading power to get a candidate (Michael Balderstone?) into Canberra.

We would suggest, though, that it gives the party some negotiating power with the Greens to force the agenda

The make-up of the Australian Senate post-election is always very tricky to determine as preferences and deals fly back and forth for the next few weeks ut our guess is that the numbers polled by the cannabis party have provided a good reason for the Greens to take up the cannabis cause and run with it.

Does this mean we should expect cannabis legislation that’s actually serious or just some tinkering with the medical side of things. 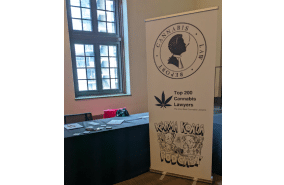 We are in San Diego this weekend at the

There are now several pending Congressional Bills related to cannabis including decriminalization and rescheduling of the drug. Thirty-six states have some form of medical marijuana, 18 States, D.C. Guam, Northern Mariana Islands, and Tribal nations have recreational marijuana laws with many other states exploring recreational marijuana for 2022. These continued changes in laws are impacting our courts and society. It is also creating a dynamic and sometimes confusing landscape for various disciplines including Law Enforcement, Judges, Drug Court Professionals, the Drug and Alcohol Testing Industry, Academia, and Employers Human Resource Associations & Organizations.

Here are a couple of photos of our set up

Do come and say hello to  June McLoughlin our roving cannabis law report education editor who has more than kindly agreed to fly the flag as it was a little pricy to fly from Sydney to San Diego for the weekend!

Thanks, June and please if you are at the conference do make sure you drop by and say hello. 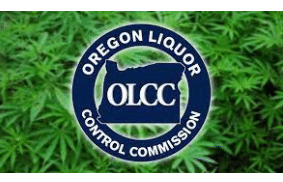 GREEN LION in St. Helens, a marijuana retailer, will pay a $7,250 fine OR serve a 29-day license suspension for three violations.

HANLIN FARMS a marijuana producer, will pay a $1,750 fine OR serve a seven-day license suspension for one violation.

LUMINOUS GARDENS a marijuana producer, will pay a $4,500 fine OR serve an 18-day license suspension for two violations.

PACIFIC NW FARMS a marijuana producer, will pay a $5,000 fine OR serve a 20-day license suspension for two violations.

TH3 FARMS a marijuana producer, will pay a $8,745 fine OR serve a 53-day license suspension for three violations.

NOVA PATHS a marijuana processor, will pay a $30,000 fine OR serve an 18-day license suspension for packaging and labeling violations.